Sitting on Parapet in Background of Kotelnicheskaya Embankment Building 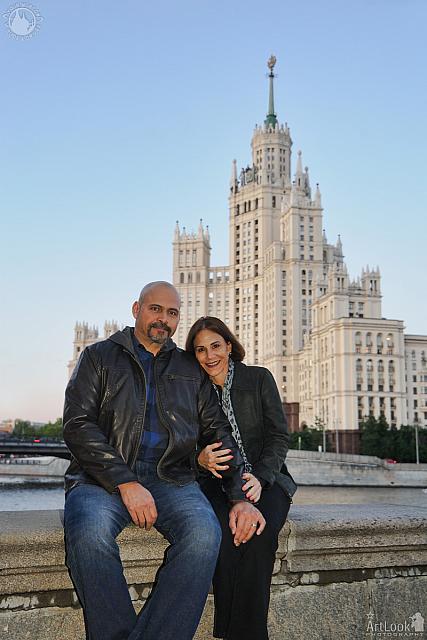 «Sitting on Parapet in Background of Kotelnicheskaya Embankment Building»

My dear clients from USA, Sergio and Odalys Cias, sit on the parapet of the river Moskva (Moscow) at Kosmodamianskaya Embankment in the background of the impressive Stalin skyscraper on Kotelnicheskaya embankment in sweet light after sunset at the beginning of the Moscow by Night tour.

The elite high-rise residential building on Kotelnicheskaya embankment is the one of a group of seven skyscrapers in Moscow designed in the Stalinist style and laid down in September 1947 to commemorate the 800th anniversary of the capital of Russia, former Soviet Union. The building designed by prominent Soviet architects Dmitry Chechylin (then Chief Architect of Moscow) and Andrei Rostkovsky was completed in 1952. Its main tower has 32 levels (including mechanical floors) and is 176 meters tall.

Steps to the House of Music

The modern building of Moscow International House of Music (MMDM) is the biggest music center in Russia. It was constructed on Kosmodemiyanskaya Embankment near metro station Paveletskaya by ENKA company in 2001-2002. Initiators of its creation were Mayor of Moscow Yuri Luzhkov and outstanding violinist, conductor and public figure Vladimir Spivakov.