At the Peter’s jolly-boat “Fortune” in Pereslavl 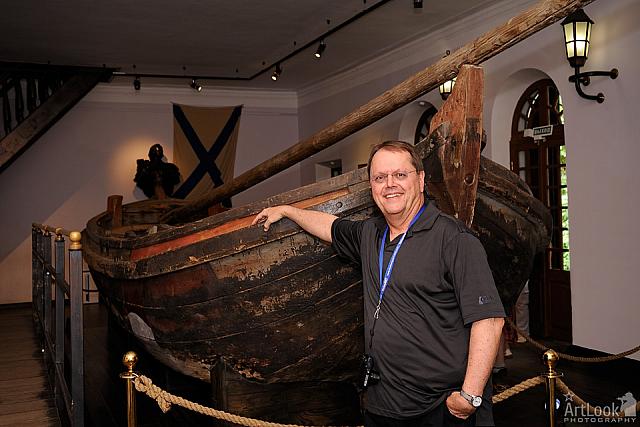 «At the Peter’s jolly-boat “Fortune” in Pereslavl»

My Dear client from USA, Jan Squires, in the Botik (small boat) of Peter the Great museum in Pereslavl-Zallesky. The Pleshcheyevo Lake near Pereslavl-Zallesky is considered to be the birthplace of the Russian Navy and the small museum keeps the history of the first Russian fleet. In 1688-1693, young Tsar Peter stayed here and built his famous “fun flotilia” on the huge lake for his own amusement, including the so-called Peter’s little boat (1692) called “Fortune” that perfectly preserved and exposed in the museum. About a hundred big and small boats were built and launched together by summer 1694. The funny flotilia became prototype of the Russian fleet.

Photo #321 taken on June 08, 2014 during long distance one day countryside tour to the cities of Golden Ring of Russia, Pereslavl-Zalessky and Sergiev Posad.

Flying Over the Clouds

A little girl imitating a fly with hands at the edge of abrupt 400-meter Red Cliff (Krasnaya Skala) with a view of the low clouds over the Black Sea and Foros settlement, the Southern point of Crimean peninsula. The famous church of-of Christ's Resurrection was built on the cliff in 1892 to commemorate the miraculous rescue of Emperor Alexander III and his family in 1888 train crash in the Borki, on the way from Crimea to St.