In front of Iconostasis of Intercession Chapel (St. Basils’ Cathedral) 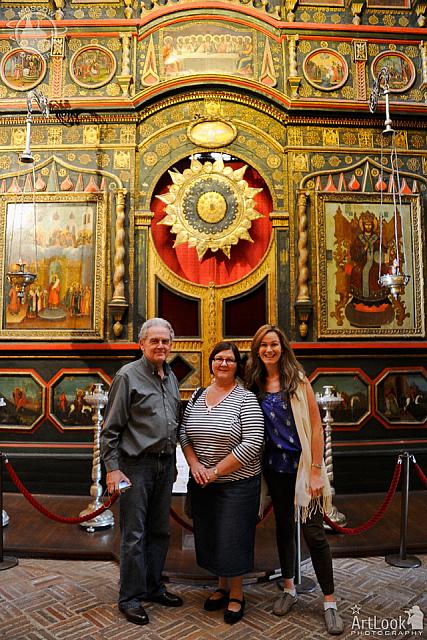 «In front of Iconostasis of Intercession Chapel (St. Basils’ Cathedral)»
My Dear clients from Australia, Ian, Angela and Elizabeth Hayles, in front of iconostasis of the Chapel of the Intercession of the Holy Virgin, the main and the tallest chapel of St. Basil’s cathedral. The beautiful screen with icons was transferred here in 1770 from Chernigov Church inside the Kremlin after it was divested of its church status. The old iconostasis was sold to Svistukha village in Kaliazin region. Photo #036 taken on June 19, 2013 during tour of St. Basil's Cathedral on Red Square. ©2013 Moscow-Driver.com by Arthur Lookyanov
Next Previous 99 of 239

The huge bronze sculpture group of combat allies in WWII with the American, British and French warriors is fragment of 50-meter high monument to the Anti-Hitler Coalition Countries designed by Mikhail Pereyaslavets. It was erected and opened on the grounds of “Victory Park” at Poklannaya Hill, the Victory Memorial complex, during celebrations of 60th anniversary of the Great Victory at 2005.