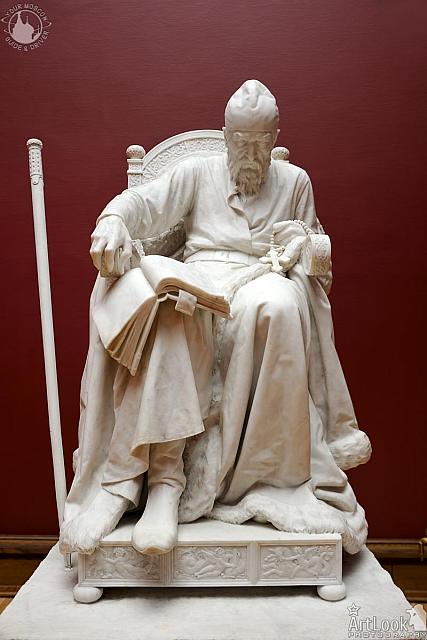 «Sculpture of Ivan the Terrible (1875) – Front View»
Buy this Photo

Front view of the marble sculpture of Ivan the Terrible on a throne created by Mark Antopolsky in 1875. It is on display in the historic building of the Tretyakov Gallery in Lavrushinsky Lane in Moscow, Russia.

Even the popular sculptor Mark Antopolsky (1843-1902) who represented in 1871 this impressive statue of the first and famous Russian tsar Ivan IV (The Terrible) had left us nothing besides this masterpiece, but it would be enough to make the first in Russia Jewish sculptor the world-famous.

Antokolsky began work on the statue while still a student at the Academy of Arts and finished it in 1871 (plaster), after which he immediately became famous and was made an academician. The noble realism, monumentality and scale of its artistic language made "Ivan the Terrible" a landmark of Russian sculpture of its day. "Never before has our national sculpture produced anything of such power of depth of expression, such reality and truth", wrote critic Stasov. And Turgenev seemed to speak for all of us when he said: "The impression is so profound that you cannot get rid of it: it is impossible to imagine Ivan the Terrible other than how Antokolsky's imagination has revealed him". The statue of Ivan IV (The Terrible) was commissioned by Pavel Tretyakov and a marble replica made in 1875 from plaster original of 1871.

Photo #080 taken on June 26, 2019 during a tour with of State Tretyakov Gallery my Dear clients from Australia, Michael Mantakoul, his Dear wife, and their friends.