Discovering the Golden Ring of Russia : « PREV | NEXT » 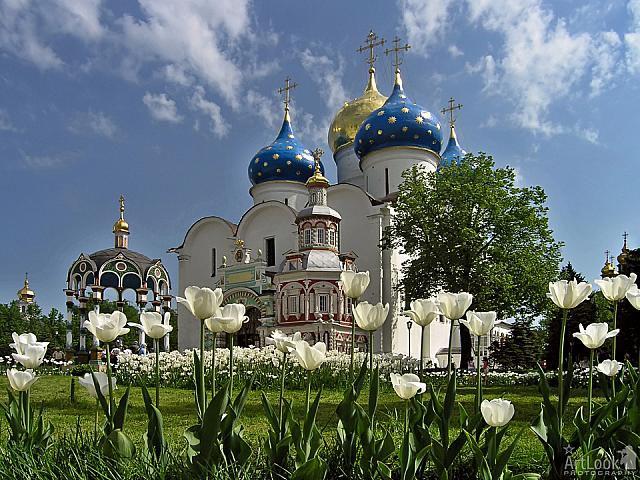 One of my guests’ favorite tours is a visit to the wonderful city, cultural and historical center of Russia, Sergiyev Posad. Located 52 km from Moscow, the city is a real gem of the Golden Ring of Russia.

The history of the city begins with the foundation of the Trinity-St. Sergius Lavra Monastery by Sergius Radonezhsky in 1337. Nowadays this Lavra is the largest Orthodox Monastery in Russia.  Some settlements began to form here, around the monastery, in 14-15 centuries, that subsequently determined the appearance of the city of Sergiev Posad. These settlements were famous for their crafts: woodcarving and manufacture of toys. These settlements merged into a single trade and industrial center – posad - in the early 18th century that was named Sergiev by the decree of Catherine II in 1782. In 1919, Sergiev Posad became a town. During the Soviet Union, according to tradition to rename the city in honor of prominent Soviet leaders and revolutionaries, the city was renamed into Zagorsk in honor of one of the leaders of the October Revolution. However, in 1991 the city returned to its former name - Sergiev Posad.

Now the city is a large administrative and industrial center, which due to its cultural heritage attracts crowds of tourists from all over the world. 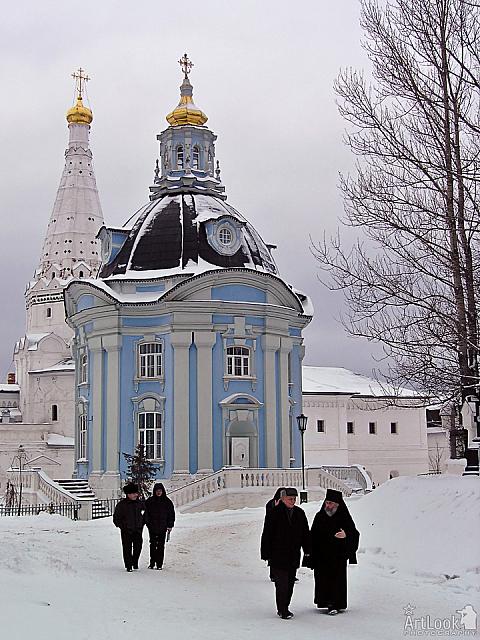 «Churches and Congregation» - See photo in Gallery
The pearl of Sergiyev Posad is the Trinity-Sergius Lavra, which was the focal point around which the town was formed. The monastery is conveniently located on the top of a hill at the confluence of the rivers Konchura and Vondyuga. The monastery was founded in the first half of the 14 century by two brothers Bartholomew and Stephan. Bartholomew, who took monastic san named Sergius, entered the history not only as the founder of the monastery, but also as an active supporter of the Moscow princes, advocated for the unification of Russian lands around Moscow.  Ivan the Terrible was baptized in this monastery. The monastery was awarded the honorary title of Lavra by the decree of Empress Elizabeth in 1744, which emphasized the primacy of the monastery among other church institutions.

During Soviet power the monastery was closed for some time, the monks were arrested. Nowadays Lavra is a working monastery, the spiritual center of Orthodox Russia.  There are the Moscow Theological Academy, Seminary and a museum on the territory of the monastery. The holy things of the monastery: the relics of St. Sergius of Radonezhsky (in the Holy Trinity Cathedral), the relics of Nikon, Sergius (Micah) Radonezh and others - attract thousands of pilgrims from all over Russia and the world.

The architecture of the Trinity-Sergius Lavra is unique. The ensemble of the monastery includes more than 50 buildings of various purposes, built by the best architects. The earliest building in the monastery is four-column cross-domed Trinity Cathedral made of white stone, which was the very center of the forming ensemble of the monastery. The second for age Lavra’s temple is Dukhovskoi (or temple Descent of the Holy Spirit upon the Apostles), built of brick in the style of Pskov architecture. The largest church of the monastery is the Assumption Cathedral, which was erected on the model of the Assumption Cathedral of Moscow Kremlin. We can speak about bright and impressive architecture of the monastery for hours, but there are not enough words to describe its entire splendor. As they say in Russia, it is better to see once than hear a hundred times.

Among the churches of Sergiev Posad there are two of special interest – the ancient churches located on the southeast side of the Trinity-Sergius Lavra, "Podol" - the Church of the Presentation of Mary and the Temple of Martyr Paraskeva.

The puppet "kingdom” of Russia

Sergiyev Posad is famous not only for a majestic architecture, and spiritual life.
Sergiev Posad is the capital of the puppet "kingdom". It was here the first Russian dolls and other toys were created. The city was famous for its toy craft, which originated in 16 century. It was here the world-famous Russian matryoshka  - a symbol of Russia, without which it is impossible to imagine our country - was born. There are SRI of toys and the country's only college of toys in Sergiev Posad. A unique Toy Museum, which exhibits the doll's history, is also houses here. There are more than 30,000 toys of different nations in the museum.
Modern technology allows the masters to Sergiev Posad to make toys from a variety of materials using all the advances in technology and science. However, the original toys in the city were made exclusively of wood.  Linden, alder, aspen and birch were considered to be the best materials for the manufacture of toys. Making toys was preceded by a preparatory period, which lasted up to two years. Only after all preparations the figures carved of wood and painted in bright colors. Cheap toys were painted with glutinous paint, and more expensive - with watercolor, oil and enamel paints.

The wooden dolls, which were of striking appearance, in absolutely incredible bright dresses, hats with feathers used to be the most popular among buyers. The people called them “Fools”. Another kind of dolls were "Ladies”; they were more subtle and elegant. Their price was higher. Over time, toys made of wood began to be manufactured in other cities of Russia, but Sergiev Posad remained the capital of the masters, famous for their high art. It never lost the championship, was able to carry it through the centuries.

The excursion to Sergiyev Posad has special atmosphere. You have a unique opportunity not only to learn about the architecture of this historic city, to touch the stones of the old convent, which still preserve the memory of former days, enjoy the atmosphere of spirituality, but also to return a piece of childhood, to revive childhood memories visiting the Museum of Toys in Sergiev Posad. You could not help smiling at the sight of those toys, which awaken the sweetest dreams.